Self promoted as having some of the best singletrack in New England, and a 1 loop 25 mile course- choosing to race the Landmine Classic was an easy decision.  The hard part was choosing between the 25 mile or 50 mile course.... I chose 25 miles and so did Katie.

We woke up early and drove north to Hingham MA.  After drinking plenty of coffee we arrived at Wompatuck State Park.  The park is huge is divided amongst many paved roads.   Wow!  This place is packed!

As soon as we pahk'd de cahh Wayne-O and Mary surprised us with a supportive visit.  We chatted with them while we suited up and got our bikes ready. Not only was it great to see them but it was a good thing they were there because Katie hadn't pre-registered and needed cash for day of registration (and obviously we didn't have any)- so Wayne-O was her race day sponsor.  They also got this great photo of us pre-race!  Thanks guys! 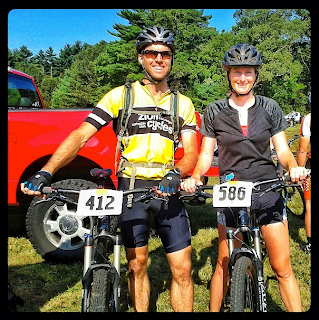 With 40 minutes to spare before the start- we split and went to warm-up.  Not being familiar with the area, I spun easily on the pavement.  Once I warmed up, I found a slight hill (paved) and put in a few sprints.  After 10 minutes of a recovery pace- I put in one higher effort push for 8 minutes.  After that I headed to the startline.

I wasn't joking when I said this place was packed.  I heard there were over 600 racers in total.  I quickly found my group- Cat 2 30-39.  I found a spot towards the front and kept my head clear and focused on recovering from my warmup efforts.  I recognized a few faces from the Gnar Weasel and this helped me form more of a start stratedgy...

5,4,3,2,1, go!  And were are off-  I quickly worked my way into the 4th or 5th position and held the wheel of someone I recognized from the Gnar Weasel.  Although, I felt the pace was somewhat slow- I maintained it.  I don't need to break any record times- I just need to beat other riders.   Wayne0 and Mary snapped this Shot as we headed to the hole shot.. 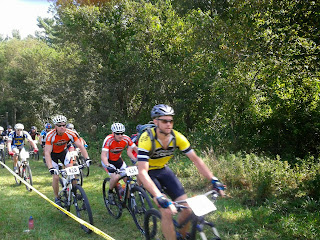 As this is the Root 66 Series finale and a well-established event- I knew a podium would be difficult here and I set my goals to finish mid-pack or around 2:20 minutes.  At 25 miles that still is pushing a pretty fast pace.  Most of my riding in CT is technical and slow and I wondered how the faster paced riding in Wompy would suite me.

We got into the trail and quickly began climbing the largest hill.  It wasn't much, maybe 100' of gain but the pace didn't settle down yet and I wanted to push through this climb before settling into a sustainable pace.  The tire I had been following began to slow up on this climb and I took a "B" option and made the pass...

I felt okay at the top but again didn't want to go out too hard- so i restrained myself and kept pace with a new tire.  On the downhill, my new tire was fast but reckless and I quickly passed them and decided to put the pedal down a little more, as downhills are one of my strengths.

15-20 minutes into the race- the pace began to subside and folks were getting gapped.  I found myself somewhere in the top ten but not entirely sure.  I ate, drank and kept a fast cadence.  I didn't want to battle cramps like I had at the Gnar Weasel.

Shortly after, I find myself battling through the younger Cat 2 guys.  They were much friendlier and let me pass at ease.  I found a few guys from Guilford and we chatted about Westwoods.  I even hit a couple of the small kicker jumps.  This course is great so far!

Somewhere around 45-50 minutes, I found myself riding alone and although it was fun terrain (berms and flow) I was unsure if I was keeping a high enough pace. I increased my pace and went harder.  I noticed a rider a hundred yards up and I decided to catch them.

When I caught up with them, I realized it was a woman from the Pro category.  Awesome!  I kept her pace and then paced her around a tight corner- when her waterbottle went flying off her bike.

From here out I pretty much blacked out.  I realized I had finished the first half of the race in around an hour or less and realized I could have the strength and stamina to crush my goal if I continued at this pace  With this much effort already invested I wanted finish strong and my focus was incredibly high and thus the tunnel vision.

Overall I thought the riding was incredibly fun.  Fast Singletrack, rocky/rooty technical gardens, and some unique flow zones separated by paved road sprints.  The strangest part was the lack of climbs.  There were climbs but they were short and punchy and I felt I could have been faster overall on the flats.....

Last feedzone- 2 miles from the finish.  I was out of water and just finished my last bit of hammer gel.  When they offered me water I just kept going.  2 miles?  I can hammer that out.... or so I thought.  Turns out this 2 miles was full of rock gardens and slight hills, and the hope there'd be a finish line around the corner made the pain even more realistic.

My hard effort from the feedzone faded probably half a mile from the finish line.  I couldn't sustain it anymore and went a little too early.  I knew according to my time I was getting close but not as close as I had thought.  Unfortunately- in that half mile I got passed by 1 guy in my category.

I finally came around a corner and out of the woods into the finish line.  Woo Hoo!  Alright!  02:10:32 says my stop watch. I pulled into the recovery tent and waited for results and Katie.

Trying to read the results board blew my oxygen deprived mind and made me dizzy.  I decided to just watch others finish on this beautiful day. 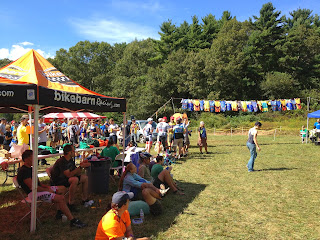 Sooner than I had imagined Katie cam ripping through the finish line!  Wow- that is awesome! 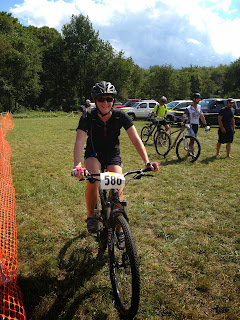 She said she thinks she finished 2nd place.  Again a champion!

After recovering we finally checked the official results.  Katie had placed 2nd and I placed 7th.  Great results for both of us and especially with the large fleet of riders. 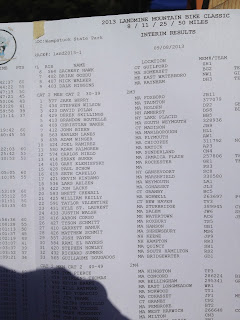 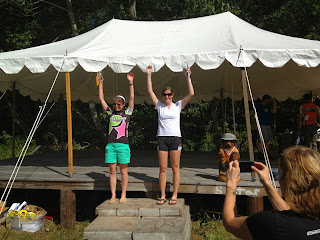 After another podium visit for Katie we headed to Randolph to meet with the rest of the Connors family, have a beer, and watch the Patriots win a football game.  What a great day!

I'll definitely be back Wompy.

Here are some other bits and pieces:

Posted by juan frijole at 1:41 PM No comments: