On June 25, 2016, I was nearly killed while riding my bicycle by two reckless drivers.  The driver and truck that hit me head on, broke 4 of my bones, lacerated my liver, punctured my right lung, and perforated my small intestine.  I was life-flighted by helicopter to a level 1 Trauma Center and endured 3 surgeries and 13 days in the hospital; I was unable to walk for 8 months.  At the time of the accident Katie was about 13 weeks pregnant.

After the first long and “exploratory” surgery I slowly drifted in and out of a druggy anesthetic haze and when Katie arrived at my side, I recalled a dream where I saw into the future as our child stood in a lake in front of the Tetons. The proud image burned into my mind but was dimly light or foggy, in the way dreams often are, and our child’s back was facing me, so I couldn’t fully meet them as I wanted; but I could hear their sweet giggly voice. In this time of hardship, the dream was so full of positivity and optimism for our future.

Exactly 5 years to the date of the crash, the temperature barely broke 60 degrees and unstable weather pulled down a thin veil of misty clouds on the nearby mountains.  To our northwest heavier darker clouds hid the high peaks and thunder clapped with echoes down the Canyons. As a light rain began to fall, I followed along the shores of String Lake in the Tetons.

A mesmerizing hiss bounced off the lake as gentle raindrops broke the water’s surface tension into tiny concentric ripples. With the approaching storm, the tourists mostly retreated from the busy area, but the weather didn’t matter to him, and with a grey raincoat on, he couldn’t resist at least getting his feet into the cold mountain lake. And as he joyously stepped into the clear water, I kneeled to take a photo.

Through my lens the hazy light of the unfurling scene became weirdly familiar.  And still with his back to me, I squeezed the camera's shutter and captured the moment I had seen five years earlier. 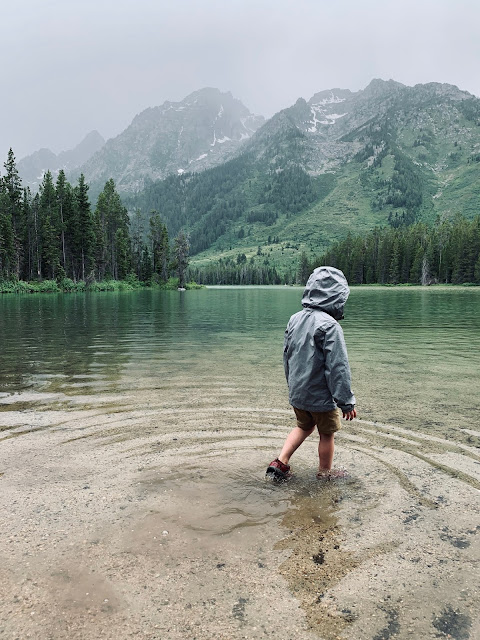